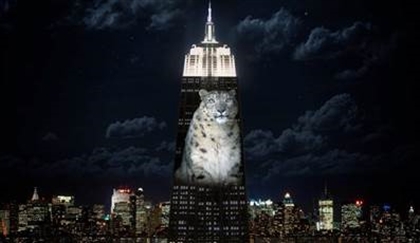 The Empire State Building will unveil a new light show to draw attention toward endangered species.

Snow leopards, manta rays, lions, snakes, birds and sea mammals are set to be projected on Saturday, August 1st onto a space covering 33 floors from 9PM to 12AM, the New York Times reported.

The project is a collaboration with filmmaker Louie Psihoyos and Travis Threlkel’s Obscura Digital, who produce the light show to create a conversation around animals facing extinction.

In light of an American dentist who recently poached Cecil the lion, a famous animal in one of Zimbabwe's national parks, this initiative is very timely.

The light show will reportedly cost more than $1 million and will be mostly covered by the philanthropic foundation.

“The whole planet could be on the same page for once; anybody with a cellphone or computer would know about it. To create a tipping point, you probably need 10% of the population … If you hit that number, then you have a chance of moving the needle,” Mr Psihoyos told the paper.